Artists know that using brush pens for drawing can bring stories to life. Drawing artists use brush pens to layout the expressions and movement in a way that a traditional technical drawing pen cannot. But an artist requires a lot of practice and dexterity to use the brush pens in an art piece.

Moreover, a brush pen is a tool for painting with colour without a brush and a set of paints. They also give the widest array of line widths for really expressive sketching.

You need to consider the following things when buying a brush pen according to the demands of your work:

Are you struggling with finding the right brush pen to practice your artwork? You are in the right place. In this guide, you can find some top brands and models of brush pens available in the market. We just put together some of the best brush pens in a list and we are going to review these products to help you in choosing the right one for you.

These Spectrum Noir art liner brush pens (link to Amazon) are perfect for sketching, outlining, and colouring the drawings. The alcohol-based pens are ideal for smudge-free and streak-free mixed media art, doodling, colouring, and detailing.

These pens come with 2 brush tips for detailed colouring, lettering, and drawing the various line widths. The high-quality micro-pigment ink dries quickly and does not leave smudges or streaks on an art piece.

The high-quality Pentel brush pens feel like a real brush earning it a name among the professional drawing artists, hand writers and doodlers alike. It’s a versatile ink brush that is easy to switch between line and wash artwork.

The pen is equipped with a durable and soft nylon tip which can flood wide strokes with solid colour and then it can give a fine lining to delicate the art piece. A covering cap is available to protect the tip from leakage or damage.

A durable and smooth nylon brush is perfect for any type of art working, anything can be done with ease.

This Kuretake brush pen was designed for writing the Chinese characters, or kanji in Japanese, but we used it in drawing and found that its felt tip is hard and flexible enough to give you nice control in drawing the thin and thick lines. There are two versions of this pen, a grey version is ideal for shading and a superfine version is perfect for even thinner lines.

The ink in the Kuretake Brush Pen is so good and easy to use. It works well with a richer black pigment.

This is a pack of 10 colour brush pens from Tombow Fudenosuke(link to Amazon). There are different brush tips available in multiple colours to satisfy your sense of creation and imagination in the fields of drawing, sketching, lettering, doodling, and calligraphy.

Fudenosuke brush pen features with flexible brush tips in different sizes to learn beautiful drawing techniques according to the demand of work. The brush tips can create extra-fine, fine or medium strokes in a drawing by a simple change in pressure.

A vibrant and versatile assortment of colours offering even more ways to use them for art drawings, comics, anime, manga, and more for professional calligraphy, lettering, and architect.

This is a pack of 24 real brush colours by Arteza Art Supplies (link to Amazon). The pens are filled with non-toxic, acid –free, and water-based ink. Its flexible tip allows you to make a variety of fine, medium, and bold strokes on the art piece effortlessly.

These real brush pens from Arteza is an ultimate and perfect tool for drawing, sketching, painting, and calligraphy. There is a vast range of 24 vibrant and real watercolours.

These brush pens give you precision control, so you can easily do everything from light pastel washes to subtle shading and gradients.

We have put together some of the best brush pens for drawing available currently in the market after gathering the opinions of artists, designers and other creative.

Manga comics are Japanese style comics or graphic novels. These comics have been growing in popularity all over the world since the 19th Century, which was when the Japanese came up with the idea. Although comics are generally meant for children, this is not the case with Manga comics. Manga comics can be read by children or adults according to their preferences as there is a large selection of comics to choose from.

If a manga comic series tends to be overly popular, the comic series is created into an Anime (Japanese term for animation) series. Anime is more or less equivalent to cartoons but the Japanese ones are traditionally known as Anime all over the world. Some of the most popular Manga comics that turned into an Anime series are; One Punch Man, Dragon Ball Z and Naruto.

Why we should design Manga by hand and the importance of doing it with the right tools.

Originally, Manga was drawn and designed by hand, and although technology is taking over most things in the world, Manga to this day is more commonly hand-designed, although computers have been used to design now and again. The precision and accuracy that can be attained by an artist’s hand in Art simply cannot be matched by any kind of technology, the personal touch and pen stroke is extremely important.

Moreover, while Manga can be designed by any sort of pen or pencil, there are certain tools you need for the design to really look it’s best and we are here to look at 3 of the best toolsets I have used to take my artwork to the next level.

3 Of The Best Pen Packs, I’ve Used For Manga

This pack of pencils (link to Amazon) is literally the epitome of ‘letting your imagination run wild’, the variety of colours available in this pack is exquisite. I have been using this pack for a couple of weeks now and I don’t recall a single moment where I wished there was a particular colour in the pack that wasn’t already available.

I have no complaints regarding the quality either, considering there are so many pencils in the pack, a few damaged pieces are expected, which I was right to expect because there were a couple of pencils which were a little loose around the tips but this did not affect the performance of the pencils, I was able to use all 168 colours without any trouble what so ever.

As I check the Amazon page now, it is stated under the product description that they guarantee a 100% quality, and if one was to face problems with any of their products, the consumers can reach out to them for a refund or exchange. Thankfully, I did not face such a situation but it is good to know that they provide this kind of service in case something was to go wrong.

In terms of the usage of the pens in itself, I was amazed by the quality, considering the price, the ink dried out after use, fairly quickly and the pens were definitely very smooth to use, no complaints in that department. Another aspect I’d like to point out about the colours is that the colours being available in a variety of different shades is a definite positive from my side.

I genuinely do not see why someone would pay more for a different brand of Manga pens when you can get such high-quality pens, in such a variety of colours for a reasonable price to say the least, definitely gets my seal of approval.

I was looking for a set of pens for my art within a budget and I could not have asked for better than Sakura Pigma Micron Fineliner pens (Link to Amazon). I love the variety I receive in the package with the 12 pieces, the different sized pens allow me to reach the full potential of my creativity, I was able to experiment with different designs using the various pen sizes.

It isn’t just the variety of pens that is impressive, the quality of the pens is second to none as well, the ink had dried up fairly quickly after use which is important and I don’t recall any sort of smudging during my artwork either. However, the only complaint I have with my purchase is that one of the pens in the set had a loose nib, it was the 0.4mm.

I had not realised this during the first few days as I had not used that particular pen, but as I started drawing with the 0.4mm pen, I could feel the nib dangling a little bit. Thankfully, there was no harm done to my artwork due to this, I realized it was loose before any damage was done. This is pretty much the only negative I have from purchasing this set but I would definitely recommend getting it to whoever is looking for a cheaper alternative, 100% value for money.

I tried using the Professional Brush and the Gelly Roll is well, they do exactly what they are supposed to do, no comments or criticism on my part on those products either.

I’ve been trying to get my hands on some Fineliner pens (link to Amazon) so I could take my Manga art more seriously and get the best results that I possibly could, as I definitely felt there was room for improvement in my art so I had to acquire the best tools possible.

I could not have asked for a better pen set to use for my artwork, the art came out more beautiful than I had ever imagined and I could not be more satisfied with the product. However, I do have to put it out there that the first time I received the product, there was a problem with the 0.6mm ink, it ran out as I was using it (and this was only like 10 minutes into my artwork), after which I contacted the company and told them about my issue.

They responded pretty quickly and I was able to get a new set of the same pens within a few days, I was very happy with the service. Although the initial delivery was faulty, I can definitely say the company dealt with the issue in the best way possible to turn bad customer experience into a positive one for me. One of the main reasons I decided to go with this pen set is due to the wide variety of pen sizes, there aren’t a lot of pen sets (of 8) that offer pen sizes of up to 0.8mm, so I was able to experiment with the various sizes on my artwork.

I have no complaints regarding the quality of the ink either, dried out fast after usage, no smudges, and smooth drawing experience. All in all, I would definitely recommend this pen set to anyone looking for a wider variety of sizes for their artwork not necessarily for beginners either, this can definitely be used for professional artwork as well. 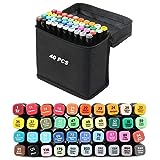 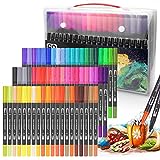 ScribbleSheet is a participant in the Amazon Services LLC Associates Program, an affiliate advertising program designed to provide a means for sites to earn advertising fees by advertising and linking to Amazon.com.